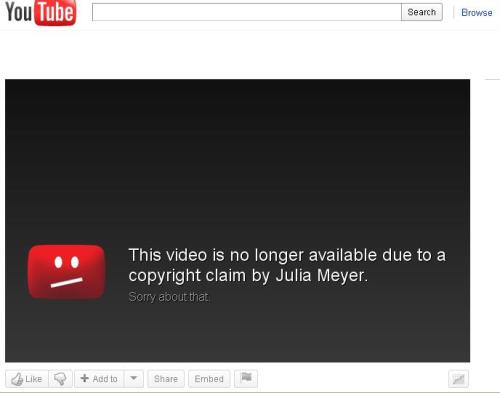 So I get an email about an hour ago from youtube claiming copyright infringement on my Rammers “Ram It” video.  I get it – someone else owns the rights to this video so I shouldn’t be posting it.  I did a little more research on the individual who claimed copyright infringement and found out it’s the same woman, Julia Meyer, that is pulling the “Super Bowl Shuffle” off of shared video sites.  I don’t mean to be rude here, but what the fuck is wrong with you, Julia?  She’s currently suing viacom because MTV and VH1 both played the “Super Bowl Shuffle” without her permission.  Her late husband made the video and passed the rights to her.  She claims that MTV and VH1 undermined her sales by playing the video.  Good Lord.  Give it a fucking rest.  It’s 2011.  When are these old balls going to realize that the world is different now?  You can’t go suing every Tom, Dick, and Harry because they played your video or your music and didn’t ask for permission.  This is the same bullshit thinking that got the record business in trouble.  The old guard doesn’t realize that multiple impressions are the key to sales.  Julia, let youtubers post your clips.  Make it available for the general public.  Put it on itunes.  The only reason I lifted the Rammers “Ram It” video in the first place was because I couldn’t find it anywhere and people needed to see it.  If you want $1.29 for it or $9.99, I’ll pay it so I can watch it over and over again.  If you’re in the hurt tank for cash, I apologize for offending you.  I don’t know your late husband and won’t pretend to know what his thoughts might be on this subject, but if he was such a tremendous Bears fan then wouldn’t he want more people to see it.  Maybe not.  Maybe I’m just one of the few that believes music and movies and youtube clips should be ubiquitous.  I can watch and listen to everything on my phone.  I don’t mind paying for it, but don’t be a brat about it because it will come back to bite you in the ass.  My Rammers video is no longer on youtube, but there are plenty more you can choose from (see below).  Continue to claim copyright infringement and sue everyone you can, Julia.  You can’t stop technology.  It’s here.  Someone will just take it and repost.  It’s already out there.  Find a different way to monotize “The Super Bowl Shuffle.”  The interest will always be around.  Just be smart about it. 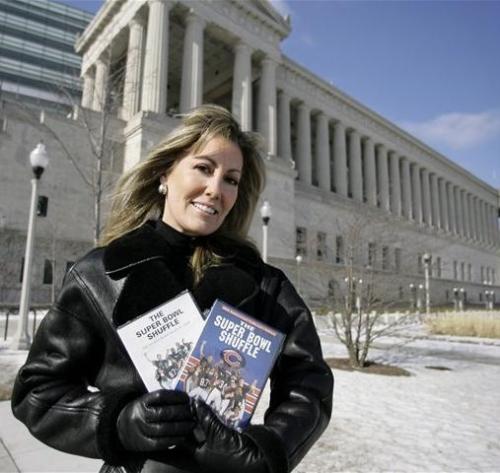 And if you’re wondering what I received from posting my video of “Ram It”…well, i received absolutely nothing.  I don’t get ad revenue or money every time someone watches it – just the satisfaction that other people think it’s as funny as I do.

BAND OF THE DAY: INTERPOL

You might be wondering why Interpol is the band of the day, because they haven’t released anything in a couple of years.  Well, let me explain.  I just found out they’re opening for U2 in Chicago on July 6 which is where I’ll be.  I’ve seen them live one time and have been anxiously awaiting their return to the road.  Great band to see live.  If their website worked I’d send you to it.

Tagged as Chicago, Interpol, U2

We sat behind this douche at the U2 concert this past weekend.  I captured him on film several times, but this might be my favorite.  I believe he likes to rock (and smoke a lot of weed).