LT AND THE “ELECTRIC GLIDE”

Wildcard weekend in the NFL is over.  The Cardinals, Cowboys, Jets, and Ravens advance.  Divisional playoffs kickoff next Saturday.  So until then we’re left with this strange and stupid video from LaDainian Tomlinson of the San Diego Chargers.

I was pulling for you guys but now I’m not quite sure.

I’ve been quiet all week mostly because I’ve been prepping for the NFL season to start.  And it’s finally here.  Thank God.

The Steelers downed my hometown Titans last night 13-10 in overtime.   I didn’t think we’d go up there and win.  They’re a really good team.  I just wanted it to be close and it was.  We fought hard and will continue to do so the rest of the season.

We’ll see them again in the playoffs.  I don’t doubt it.

Steve McNair died from multiple gunshot wounds this past Saturday July 4th.  His girlfriend was found near him with a single gunshot wound to the head and a handgun underneath her.  Investigators won’t call it a murder-suicide yet but to the untrained eye it looks pretty obvious.

McNair, a married man and father of four, had been dating the girl for months.  We don’t know the status of his relationship with his wife Michelle, but I’m hoping the media doesn’t lose sight of the wonderful man that McNair was on and off the field.  He’s done some amazing things for the Nashville community and was truly a hero to many.  We’ll miss him greatly.  It’ll be a damn shame if it turns out this girl went Fatal Attraction on him.

It’s a crazy world out there.  Be careful. 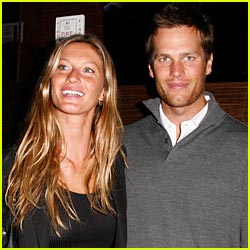 Tom Brady and Gisele have officially tied the knot at a secret wedding ceremony yesterday afternoon in Santa Monica, CA.  He’s such a loser.  What has he ever done with his life that’s so great?  Gisele, you really don’t know what your missing here.  I’m an internet phenomenon I tell you.  He didn’t even start last year.